"I thought you were dead! I had orders to kill you! I knew you were a good man –a man of integrity — and I couldn't carry out those orders, but I thought another one of my colleagues would!"
–a demobilized paramilitary 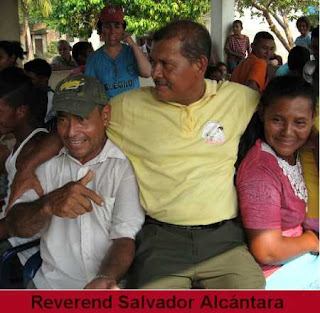 Reverend Salvador Alcántara, from Garzal township of Simití municipality in the southern Bolívar province, is a remarkable, exemplary and inspirational man. He is a husband, father, grandfather, pastor of a local church, farmer, president of the Garzal town council, and vice-president of ASPROAS – Association of Alternative Producers of Simití. That he is able to take on all these tasks and do them well has earned him the respect of both the larger community of Simití and his own smaller community of Garzal. His interpretation of his pastoral duties has led him to become involved in his community's struggle to stay on their lands in the face of constant threats of forced mass displacement.

The much-heralded achievements of the Uribe administration –the demobilization of the paramilitaries and the recovery of large tracts of land once controlled by guerrilla groups, have failed to provide residents of Garzal with security. On the contrary: The government has refused to recognize them as the legal owners of the land and instead granted title to these lands to a drug trafficker. Most residents of Garzal have lived there since the early seventies and should have received squatters' rights after only five years of occupation. (See photo essay) The title-holder left when his cocaine laboratory was raided in the late 1980s, and he wasn't heard from until 2003, at which time he returned in the company of paramilitaries. He then presented local residents with an ultimatum: Leave or die. Some families fled, and Salvador as the local representative received both bribes and personal death threats. Years later Salvador ran into a now-demobilized paramilitary, he expressed shock at seeing Salvador alive: "I thought you were dead! I had orders to kill you! I knew you were a good man –a man of integrity—and I couldn't carry out those orders, but I thought another one of my colleagues would!"

It seems that in addition to the respect of his local community and parish, Salvador has also gained the respect of some of his enemies. Salvador attributes his being alive to God's providence.

In December of 2008 Christian Peacemaker Teams (CPT) received an accompaniment request because of fears that a large group of armed men gathering nearby had been contracted to carry out the original death threats.

Salvador, I know, sees God's hand in all these things, and has chosen to look for ways in which he can actively collaborate with his God. He never allows his faith in God to become an excuse for doing nothing. May we all learn from his example!

(The May 26th - June 8th, 2009 CPT International Delegation will be visiting Garzal.)

MISSION STATEMENT: Christian Peacemaker Teams (CPT) Colombia is a community made up of trained volunteers from different cultures that forms part of the international, ecumenical organization, CPT. Our work is based in, though not limited to, the Middle Magdelena region of Colombia. We work together on grassroots initiatives to expose and transform structures of domination and oppression through active nonviolence in order to make possible a world grounded in respect, justice and love, even of enemies.

Popular posts from this blog

By Jim Fitz August 14, 2019
-->Off to Colombia: 2010 Annual Report April 10, 2010 Dear friends, I fly to Bogotá on April 20th for two months where I will set up interviews for Paul Alexander for his book on Christians that are working for peace and justice. I will also be sharing with Mennonite Brethren congregations in Colombia to encourage them in their peacemaking in the midst of the war. This year I began sharing on a subway platform. I give out 20 - 30 pieces of literature an hour. I encourage people to pray and let their government representatives know their concerns about war. I tell them how we’ve reduced suffering in Colombia by reducing U.S. military aid. With youth, I share important questions to think about before they enlist in the military. I plan to continue this sharing when I’m home in Chicago. See my live video subway sharing at: http://www.youtube.com/watch?v=X1lgdHD_zz0 on my website.
-->‘‘That Jim is able to make a commitment to witnessing in the subway for peace an…
Post a Comment
Read more

Running Out of the Classroom

By Jim Fitz May 16, 2019
Hello friends, Running Out of the Classroom 4/1/2019 She stood up to share, and then she just runout of the classroom. I was confused, I had no idea what was going on. In a few minutes she returned and began crying and sharing about some terrible violence that had happened in her family. This started about 8 in the class one by one to cry and share about violence that took place with their uncles, aunts, parents, grandparents or neighbors. This ended up taking up the entire time of the last two classes of my time in Colombia. This likely was the first time they had shared these things outside of their families. This surely was healing for many of the students. The adult friend who was there mentioned she was having someone experienced with trauma healing coming to her church. She hoped to have her go to the school and help some of these students. It felt a real gift to be able to hear and share these things. Afterwards as students often did after class…
Post a Comment
Read more